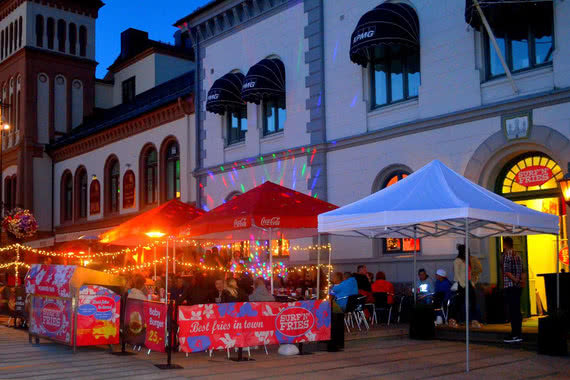 Surf’n’Fries is a Croatian fast food network, very popular on the Balkans.

Tucano Coffee is the only successful network of coffee houses in Moldova which recently opened up franchise stores in Romania and the United Arab Emirates.

Bartek is a Polish manufacturer of children's footwear. This brand's products are already available in Russian department stores; however the company seeks to open its own network.

UCMAS is a global educational corporation from Malaysia which opened about 5 thousand centers since 1993 in 54 countries of the world, specializing on mental development of children.

According to Ekaterina Soyak, the board member of the Russian Franchise Association (RFA) and CEO of EMTG (the organizer of the largest franchising exhibition BUYBRAND Expo) the fast food market is one of the few spheres of the Russian business which continues to grow despite the crisis. The success of this direction pushes many companies to choose franchising, even though until now they have always developed only as a corporate model. "In this context the interest of the Eastern European players in our market is understandable. Such companies usually have quite low-cost schemes demanded at the time of the market recession. As for the Malaysian concept of UCMAS, it demonstrates an important trend - increase in number of educational franchises. The market of private education is underdeveloped in Russia, because of the historical state monopoly. However, the more high-quality international brands appear, the higher will be the customers' trust to independent projects. Those players, who occupy the niches today, will ensure profit for the years ahead."

As Ekaterina Soyak noted, about 25-30% of franchises in Russia today are of foreign origin. At the same time the segment of public catering accounts for 20-22%, and this direction still remains most attractive both for Russian and foreign companies.

The official presentation of franchises is planned for September and dated to BUYBRAND Expo (to be held on September 28-30 in Moscow).